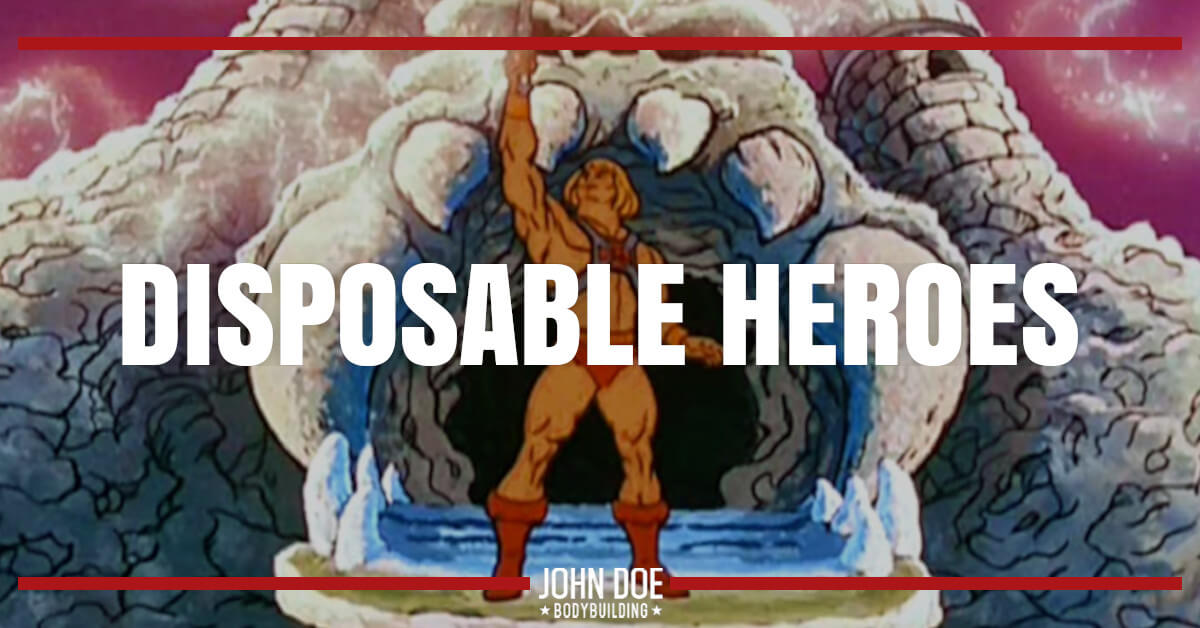 I was a child of the 80′s, and as you know the 80′s and a good part of the 90′s were all about action flicks and heroes. It all started with my He-Man action figures. If you were going to be anything worth a damn in this world then you better look like He-Man.

He-Man looked roided out to all hell, as did the rest of the Masters of the Universe. Fuck G.I. Joe, I said. G.I. Joe toys weren’t muscular enough, not like He-Man was. I actually have an original He-man, Skeletor, and Castle Grayskull and I’m almost 33 years old.

Then came the action movies I would watch with my Dad. I can’t even tell you how many times I’ve watched Commando and Predator, which to this day I’d say Predator is still my favorite movie ever.

Boy, how Hollywood can warp your mind. I never would have thought that Dutch (I’m sorry, Arnold’s name in the Predator) would have been fucking that nasty maid in real life. I mean really, this big and powerful man who is cut up to all hell… fucking a nasty maid!

When I wanted to get muscles it was the movies that motivated me. I saw Pumping Iron in the light it was filmed in, I didn’t think of the lead role having triple bypass surgery at an early age. I saw Jean Claude Van Damme as the badass in Kickboxer and Bloodsport, not the smart ass who opened his mouth at a bar and got the shit beat out of him in real life. Stallone, I can't say much about him. Stallone has kept it real since day 1 and is still kicking ass. Stone Cold Steve Austin, the redneck hero in the wrestling ring, busted for domestic violence, or Chris Benoit who slaughters his family before taking his own life. Who are these heroes?

You see, we get these images in our minds that are so distraught sometimes. This is exactly the hype of bodybuilding as well. Bodybuilding shows you all of the hype, and hides all of the nasty stuff. There is a cold and dark side of the lifestyle that people have no idea about, and has been around since the beginning of bodybuilding's Golden Era back into the late 60′s and 70′s.

Bodybuilders living with gay doctors, gay for pay bullshit, drug dealing, recreational drugs, among other crazy shit nobody who picks up a copy of Flex magazine now would even think of. One of my biggest influences in bodybuilding was Mike Mentzer, however the fact that he was addicted to speed, smoked cigarettes, and ended up almost homeless from his drug addiction doesn’t cross many people’s minds when they read about his “Heavy Duty” training.

There are all these guys on these fitness forums who act like self proclaimed doctors, constantly defending their usage of anabolics. The dosages they encourage people to use are flat out fucking retarded also!! But what really pisses me off… show the God Damn physiques!! Show me the fucker who claims he runs 2 grams of test a week, and 600mg of Tren. Show me the guy who says Primobolan is only good at 500mg a week +. You’ll never see 'em, because they’re full of shit!!

Well I get regular blood work done, and it has progressively gotten worse and worse the past 5-6 years. It's been right there, staring me in the face!! Cholesterol out of whack, high liver values, and now a fucked up sugar level which requires EXTREME LOW CARB DIETING (which I hate by the way), 2 different types of insulin, Metformin, and a couple other script drugs. So much for all my heroes huh? But I’m not letting it get me down, its time to fight! It's time to get back myself, to believe in what I’m doing again and feel good about the choices I’m making.