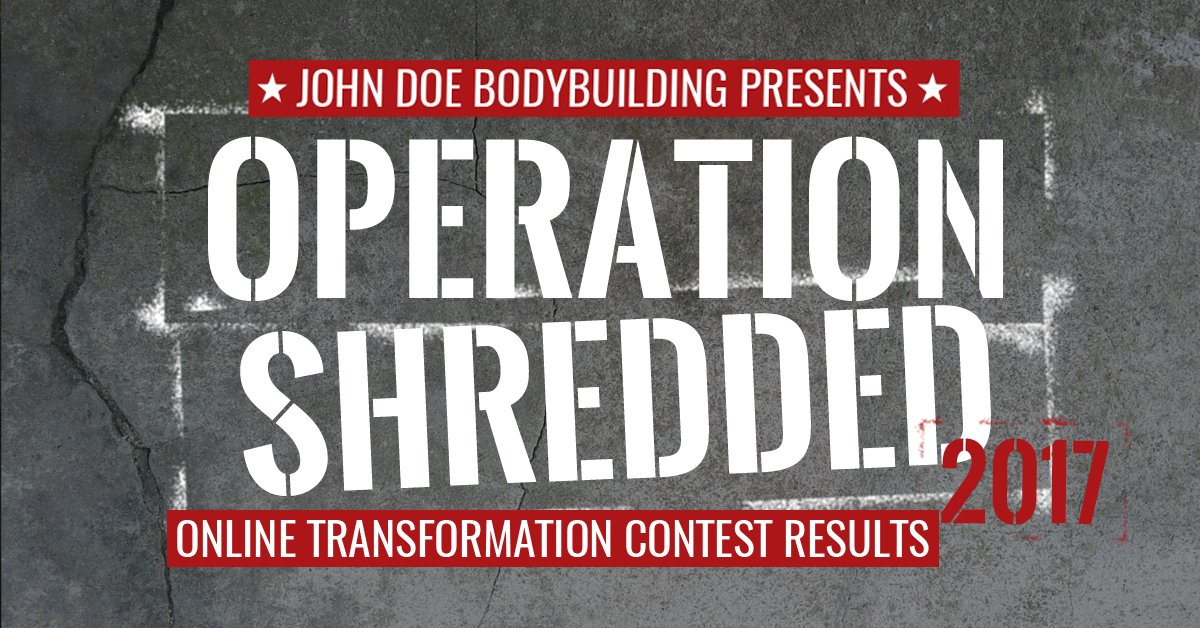 I decided that it was easier to just do a transformation contest where the judging was based on whoever made the most visual transformation.

I wanted people to bust ass and take it seriously, so instead of doing a 12 week competition like I had done in the past, I decided to make the competition just 8 weeks long.

I felt like it would be easier for the guys who entered to keep the pedal to the metal for 8 weeks straight rather than something that seemed further away with more time to stray off course.

I also wanted people to see exactly what can be done in just 8 weeks when given the right direction and providing the discipline it takes to follow that direction!

At the end of 8 weeks I had a very tough choice to make. I was placing the top 3 guys in order but I couldn’t accurately do it this time.

2 of them had lost over 25 lbs of body fat each in just 8 weeks, but the 3rd guy had started leaner and actually lost body fat AND gained 7 lbs!

So I made the decision to give all 3 of these guys a 1st place tie, give all 3 an additional 12 weeks of training, and award all 3 competitors 40″ engraved swords!

Each one of these top 3 guys put in a lot of effort and made the decision to do whatever it took over 8 weeks to make the changes.

Losing over 25 lbs in 8 weeks doesn’t come without some discomfort, nor does gaining muscle mass AND losing fat on a caloric deficit feel warm and fuzzy either!

Let’s move on to the results…

Background: Drew is a chef who cooks delicious food for people day in and day out. That’s right, he diets his ass off while staring at good tasting food all day long! I don’t want to hear about how hard this is for you when this guy is doing it as a chef who stares at food all day!!

Drew had done my fat-loss competition last year and placed 3rd. He spent the downtime in between packing on size, and that he did! I didn’t recognize the guy in the photos at first because he had gained so much size.

With the size came some fat gain and bloat, but I could still tell that when he leaned up again he would be a much more muscular:lean version of what he was in the past…and I was right!

Drew had a unique challenge for me to work with. He wasn’t just dropping fat, he was dropping fat during PCT! He was recovering from a SARMS run. This provided an additional challenge but he blasted through everything nonetheless! 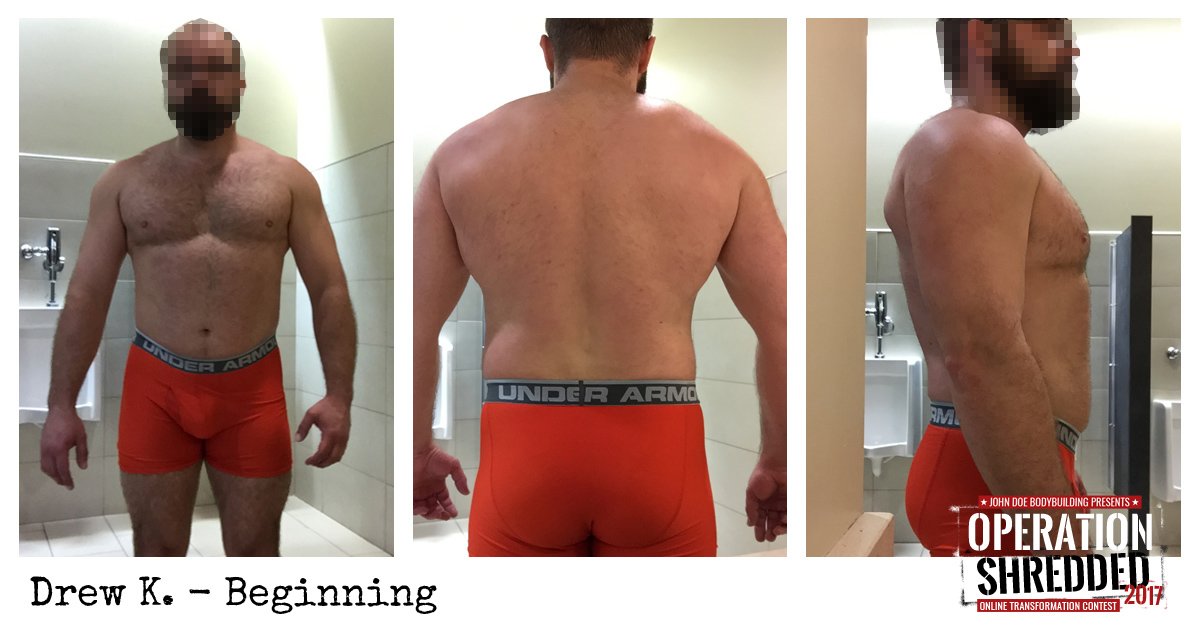 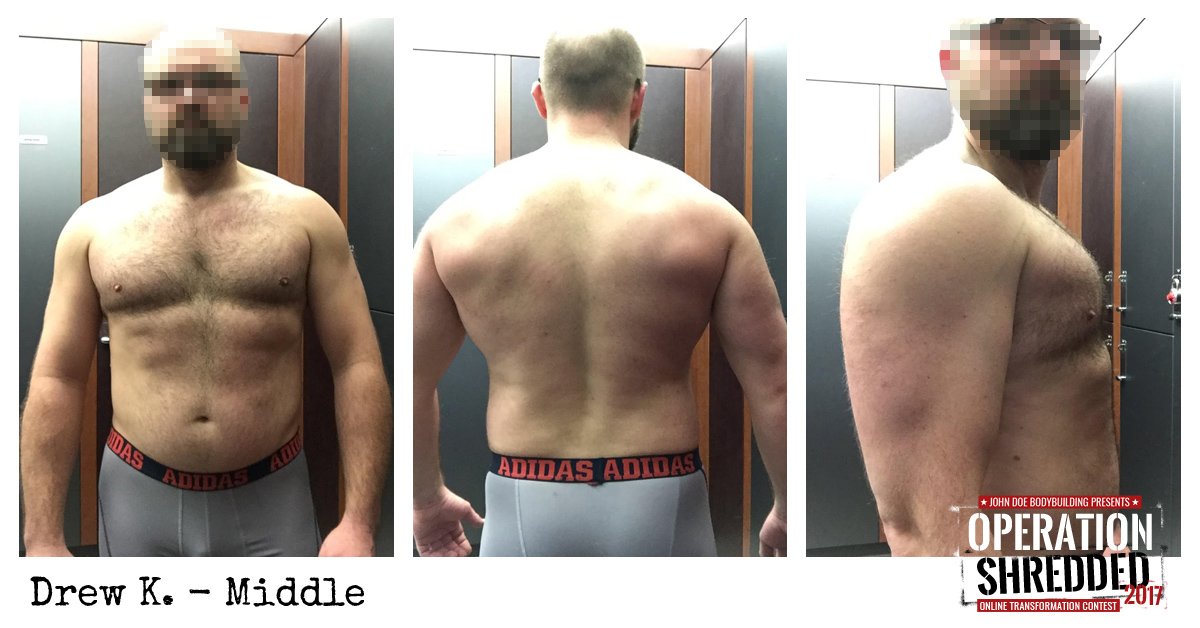 I’ve really enjoyed my time training under John Doe. I lost 25 lbs during the 8 week challenge! John gave me all the tools I needed to be successful. The rest was up to me. John isn’t one to hold your hand and listen to sob stories. You must be tough, and be able to take constructive criticism and grow from it. You truly will be able to achieve your goals if you do exactly as told and not be a pussy about it. I encourage anyone wanting to make serious body transformations, to let John lead your way!!!”

Goal- Beginner to weight training who wanted to lose fat and become familiar with weights.

Background: Bryan is a real estate developer with multiple projects going on at any given time. He has been an avid reader of Johndoebodybuilding.com but just didn’t make the commitment to jump into lifting weights until he signed up for the 8 week challenge.

He has spent the past several years working on his business and always wanted to be in great shape despite other endeavors and extremely pressing demands in his work life.

When he signed on with me he told me to give him the most effective thing I could possibly draw up for results. Hearing this is like music to my ears! When a guy actually tells me, “Look, I’ll do WHATEVER IT TAKES TO CHANGE MYSELF” it motivates me as well!

Just hearing that is a reminder to myself to keep striking while the iron is hot. This guy is a true representation of what JDB is all about. He didn’t neglect life for his body, he made fitness work with his life!

Throughout all of this he still traveled with family, enjoyed his summer, and stayed committed to everything he had going on with work and life (which I promise you is about 50 times more than most!) 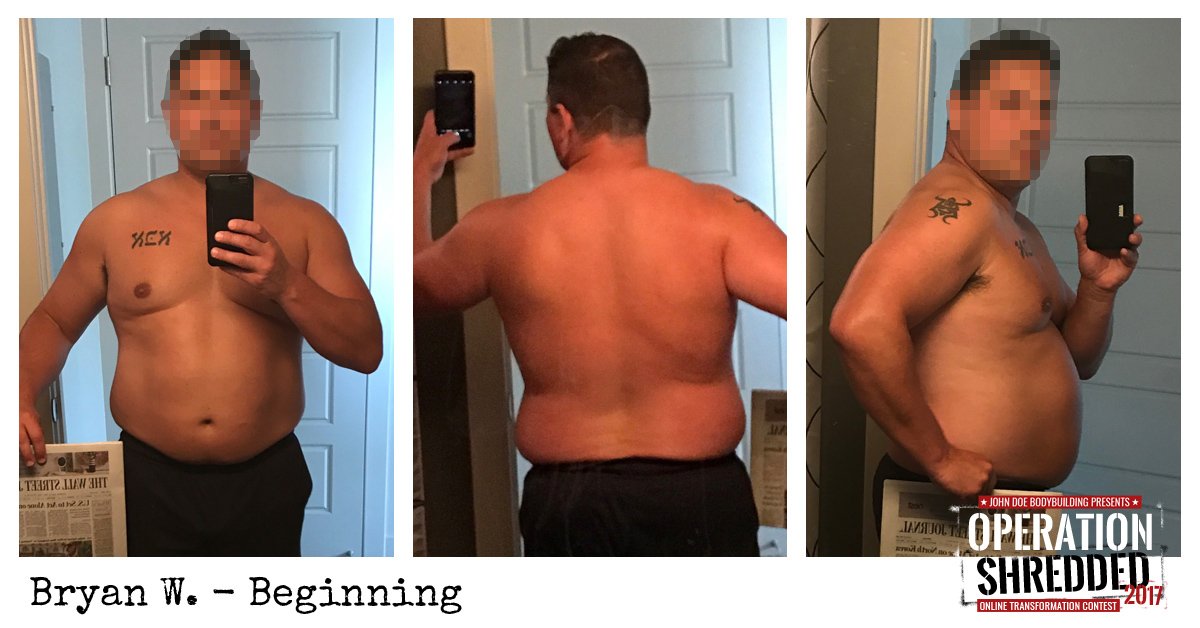 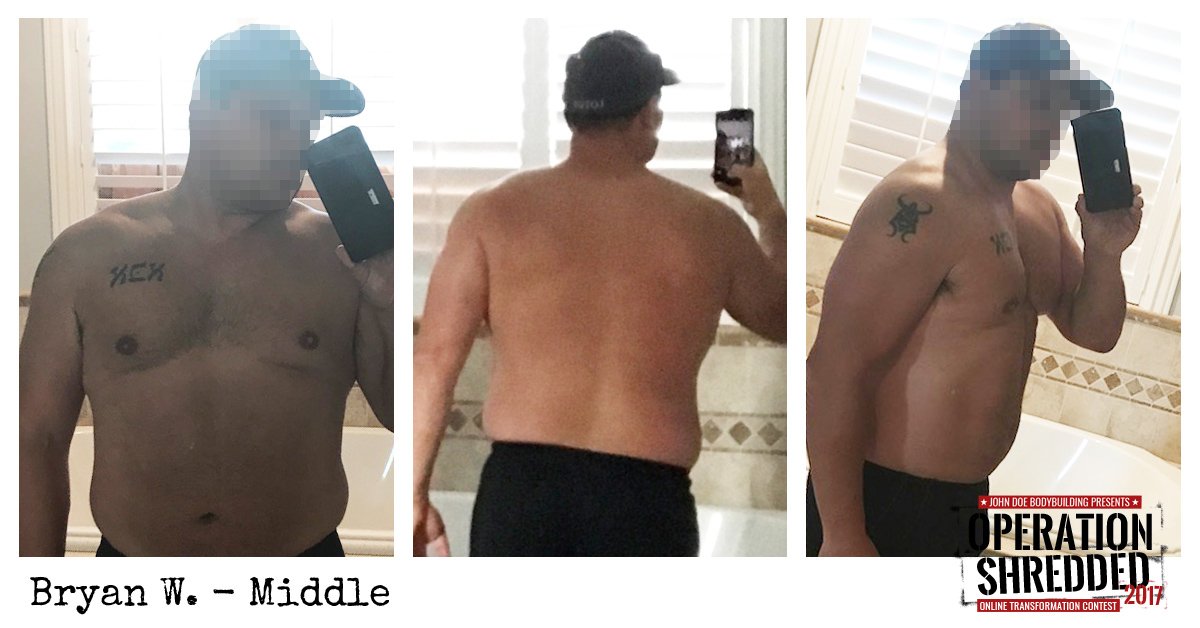 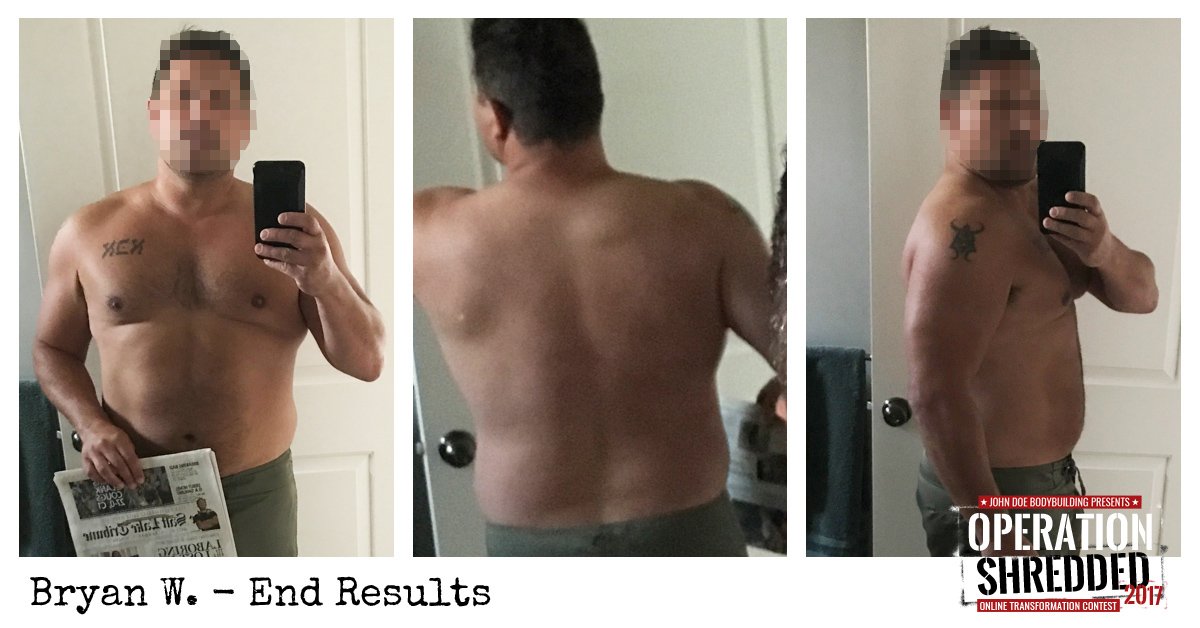 I needed this 8 wk contest to lose fat and get started with a new lifestyle. I told John not to go easy on me and to give me the most effective thing for weight loss he could come up with. John was prompt with answering all questions and getting me to dive into this head first. It wasn’t easy and he didn’t sugar coat anything when he explained what I’d be going through over the course of the intense 8 wks. I stayed off the scale until the very end and was amazed to see that I lost 28 lbs in the 2 months of this contest!!

You cannot go wrong training under John. You’ll need to follow the routine and diet as best as possible but everything he tells you to do works!! Highly recommended and best money I’ve spent in a long time.”

Total weight gained in 8 weeks – up 7 lbs and leaner

Background- Nick is a youth counselor who works night shifts and he does part time stone and tile work. His nutrition and training needed to be tweaked a bit to accommodate his work schedule but it was nothing I couldn’t make adjustments and work with.

He told me that he was a huge fan of high intensity training so I kept that in mind when designing his program. So many people feel like they need to live in the gym to do this and Nick is proof that as long as you adhere to the nutrition and train with intensity, amazing changes can be made in as little as 8 weeks!

Throughout the routine he continued to make progress, but the biggest changes happened in the final few weeks of training with me. This is common with most. Your body is like a paper towel roll and at first you can use a few paper towels and the roll doesn’t look any different. Then as you get further into the roll you visually see it change faster! Excellent job Nick! 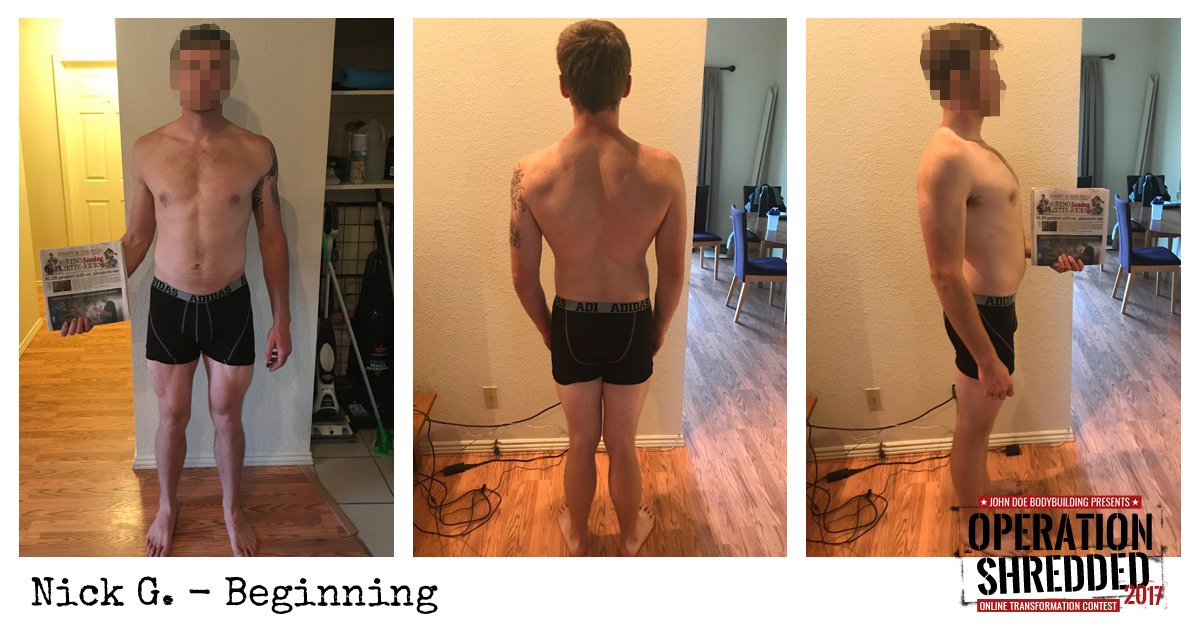 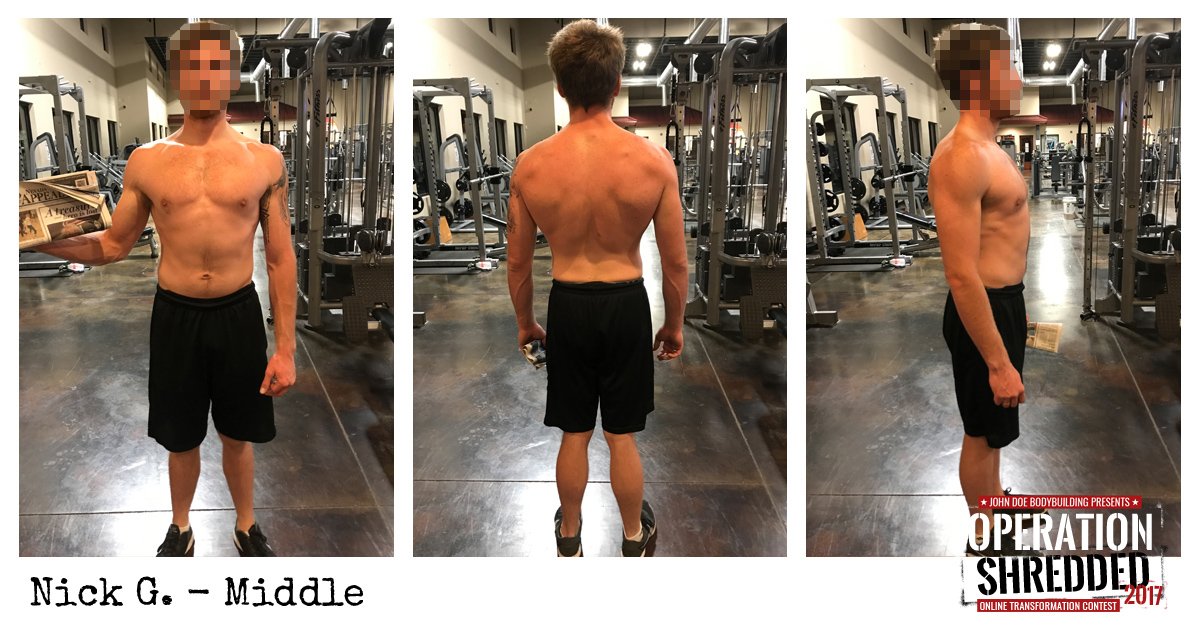 I was skeptical to try another online personal trainer because my first experience was terrible; however, I had been following John Doe’s blog for about a year and a half and really liked the articles he posted and the strait-forwardness he presented in the articles. When the challenge came around I couldn’t help but sign up, I mean, the training packages were discounted too! Within a couple days of signing up and getting registered for the event I received a phone call from John Doe. During the phone call he took the time to get a sense of what kind of person I was and the habits that I did from day to day. In the process, I as well. got a sense of who he was. I got to put a personality behind the guys articles I had been reading all along. The training program and diet plan John gave me to follow was super strait forward and easy to follow. This was not a complex program that I needed to spend 3 hours a day in the gym. Like every good trainer he tailored my training and diet around my lifestyle; thus, I could achieve the best results without changing or stressing my life anymore than it already is. It’s funny, I remember the first time I read the leg workout, I thought to myself, “what the hell? this is not going to be enough for me!”. Let me tell you what, the first time I did that leg workout they shook for about 6 days haha. Good thing my work has handy cap bars for the toilet! Every week John would get a hold of me and make sure I was doing good and not running out of motivation. Working with John has opened my eyes and brought some knowledge into the way I train which I am most grateful for. I look forward to working with him again and making even more progress. If you are thinking about doing a program but aren’t sure whether its worth it or not, I get it. I was in the same position, take the leap and sign up for one of his programs. You won’t be disappointed with your decision!”

Along with winning their 40″ engraved swords all 3 of these guys will continue to train with me for an additional 12 weeks as part of their prizes for placing in the top 3!

I’m extremely proud of each one of these guys!

They all had their own challenges and didn’t neglect life’s responsibilities for just the gym. This is the heart and sole of what JDB is based on! It’s learning to adapt, overcome, and conquer!

Think of where YOU COULD BE if you dedicated yourself to transforming your body!

I enjoy helping people get serious results. With seeing the changes that came with Operation Shredded 2017, I’d like to help more people get muscular and leaner.

You can start packing on fat and go into hibernating mode this fall, or you can go your own way and be different than everybody else! I never wanted to follow the sheep myself.

Why not get lean and jacked now and then take it that much further after the New Year? Why be like everyone else and try working off fat all spring when you could be putting on the finishing touches instead?

Train hard, never give in, and destroy everything! -JD

Check out my personal training packages!