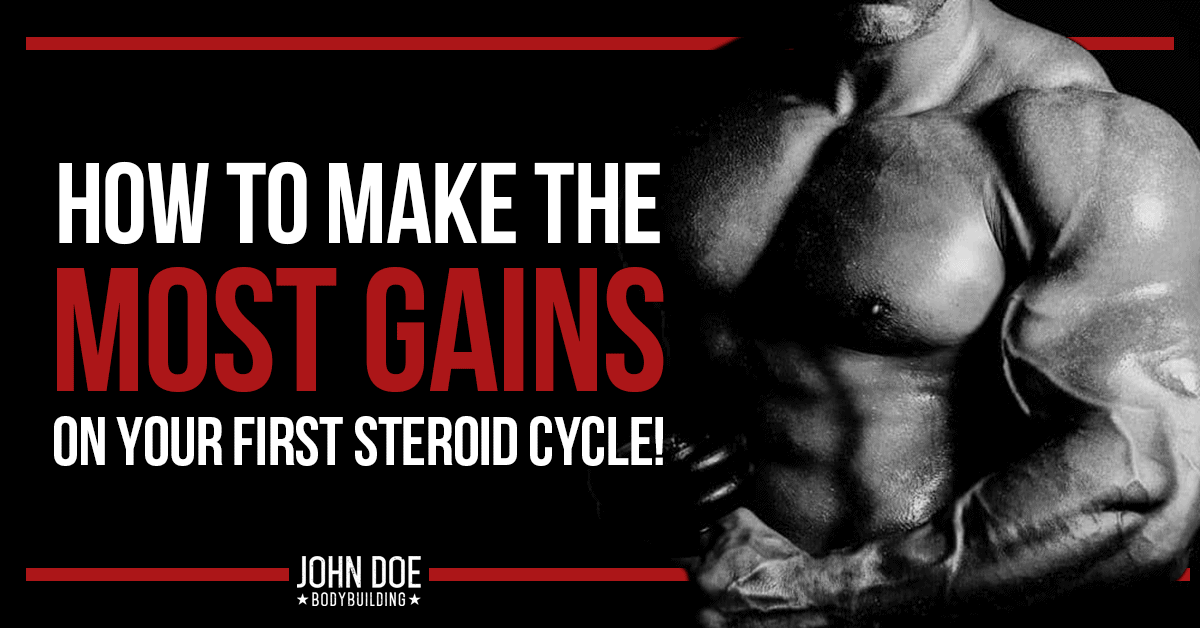 I’m here to tell you a few ways on how to make THE MOST GAINS on your first steroid cycle!

I can remember being in a high school health class where one day the teacher made us watch a video about the dangers of steroid use.

There was some famous football player who began the video talking about how “I’m here to show you that you don’t need steroids!”

I put my head down on the desk and went to sleep throughout most of the video. I could have cared less about steroids back then and I thought that surely I would NEVER stick a needle in my own body.

After all, these things were portrayed as these hardcore injectable drugs that only a junkie would use.

I continued to go to the gym and pound weights with my own willpower and food… LOTS OF FOOD!

My gains were going great for the first few years. I felt incredible as I continued slapping on more muscle mass and more weights on the barbell each week.

I had gotten my thin stature of 143 lbs @ 5’9″ up to 205 lbs fairly lean. I had gained over 60 lbs of muscle mass with hard training and dedicated eating. Eating, eating, eating, and eating some more, I was an eating machine!

I began hitting plateaus in my training that weren’t like the former plateaus I had ran into. No, these were plateaus that I knew I probably wasn’t going to break on my own.

I had to be realistic and ask myself how much larger I was naturally going to grow. I had gotten into lifting weights in order to be happy with the way I looked and felt.

In the beginning I had this idea in my mind that if I could just go from 143 lbs to 175 lbs that I would look great! Once I got to 175 lbs it just wasn’t the picture that I had in my head.

So then the goal became 190 lbs, and I had climbed to 193 lbs which was my body-weight when I graduated high school.

From my first semester on in college it had seemed like gaining more muscle mass was an EVER-LOVING BITCH!

I tried all different kinds of weightlifting routines, rep schemes, supplements, and food. I was slamming food like it was going out of style!

Yet, I stayed stuck between 193-200 lbs. I wanted more, and after I had broken 190 lbs the look just didn’t yet match the picture that I had in my mind of what I thought I would look like.

I started to realize that I had 2 choices here: be happy with where I was at and maintain it, or take the next step and look into performance enhancement. I took the next step.

You see, throughout the process of gaining muscle mass and loving the gym I had learned an awful lot about myself.

Some of the things I learned about myself were:

So I think with taking steroids the biggest questions most people should be asking themselves is, “How much am I involved with the gym? How long have I been into this? Do I see myself continuing to go to the gym no matter what happens in my life?”

Because you really don’t want to be taking hormones just to shut down your system when one day you’re going to be out of the gym and not have the same muscle mass anyways! That is not a win/win in my book.

Steroids are a big commitment. They should not be used as a quick fix or to build a foundation that you never had to begin with

I’d say 20 lbs is a realistic number to gain for most people after their first cycle. Some may gain a few more lbs and some less, but I think if you can slap on 20 lbs in 8-12 weeks then you’re doing great!

The second thing you need to know is that steroids do not make you grow. They simply place your body in an environment to grow if everything else is in place with your training and nutrition! Yes, a large percentage of people take steroids and get absolutely nothing out of them because they’re lazy!

If you weren’t preparing your meals and training like your life depended on it before the gear, then there isn’t much of a chance you’ll change just because you’re on something now.

You better have the work ethic before doing a cycle, otherwise you’ll be highly disappointed with your results!

If you’re reading this article then chances are you’re considering a cycle yourself.

How to make the most gains possible on your first steroid cycle.

1) Eat like a motherfucker, save getting cut up for later on down the road. Eat, eat, and eat some more. Chances are you weren’t even eating enough naturally, but now you had better get everything you can in terms of caloric reserves. Give the gear something to feed off of in order to gain the most muscle mass possible!

Fuck everything you’ve read about eating squeaky clean. I’m here to tell you that when it comes to growth all of that dieting hard garbage can go out of the window!

Yes, foods should be of good nutrient value and healthy for the most part. But I seriously see nothing but benefit to 1 cheat meal EVERY FUCKING DAY when trying to grow! Don’t believe the mainstream bullshit…. EAT!

So despite heavier weights feeling more uncomfortable, more grueling, and feeling as if they kick the shit out of your body more, YOU NEED TO BE USING HEAVIER WEIGHTS ON THE REGULAR!

Now, do I need heavy weights on the regular myself? No, I do not. But I have been there and done it and the way I train now is totally different than the way I needed to train in order to complete my foundation.

You just need to train heavy and quit worrying about doing everything at once! EAT…LIFT…GROW, that’s all you need to think about during your first cycle!

3) Stop trying to live like everyone else! Right now the goal is to grow…period! This means that you don’t just play bodybuilder Monday-Thursday, fuck off Friday night until 4 am, stay in bed hung over on Saturday for half the day, and eat doughnuts in church on Sunday!

You need to make up your damn mind and decide right now whether you want to be a jacked motherfucker with some discipline, or some dumb fuck who makes believe he’s some freak in the gym for half the week and then slacks the other half!

When I did my first cycle I did nothing but eat, sleep, and breathe the gym life! I embraced the discipline and I trained harder on that cycle than I had ever trained before that.

I told myself to act like I was on nothing at all and try to make gains, and then the gear would only accelerate my progress. But I got my mind right for that cycle beforehand!

Just take whatever the hell you have and train your ass off! People spend far too much time racking their brains over the perfect cycle now!

The best way to be is to inject whatever the hell you’re using (probably testosterone for a first cycle) and then forget about it throughout the rest of the week. Just train hard and bust your ass and don’t even think about gear!

Make believe you’re on nothing and you’ll be surprised at the gains from your first cycle!

PS – If you would like more in-depth information on using performance enhancing drugs be sure to check out Straight from the Underground. Straight from the Underground is the ultimate steroid reference guide that gives you the information in an easy to understand way. It’s written by someone who lives the life and has done everything they speak about, not some armchair theorizing geek with no real-life experience in the arena of anabolic steroids.

God help us all, Grandpa is on Trenbolone! Chapter 3

This is the third installment of this story. Click the links here if you missed

33 thoughts on “How to make THE MOST GAINS on your first steroid cycle!”