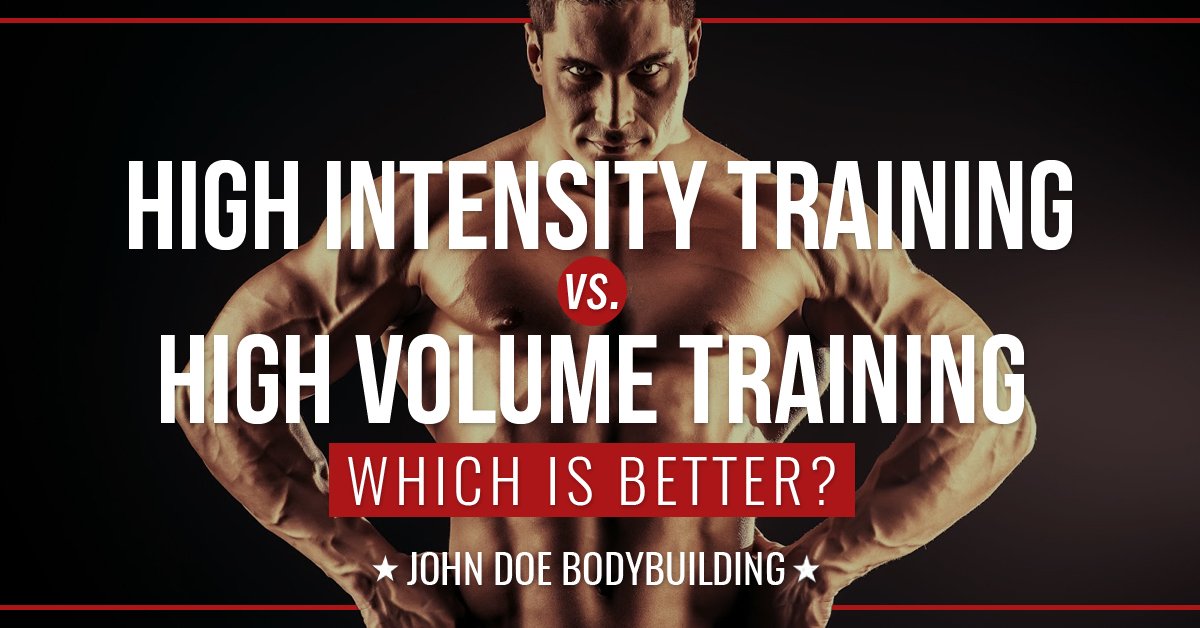 HIT VS VOLUME. Which style of working out is the better approach for bodybuilding?

It’s hard to discredit either style of weight training because there have been countless examples of people who have built incredible physiques using both.

So my stance on it is pretty simple; I’m partial to HIT (high intensity training) for recovery purposes, however I’m wise enough to know that training this way can also become detrimental at times.

When I use the word “detrimental” I’m using the word mainly around the issue of injuries. Mike Mentzer was a professional bodybuilder who really exposed the world to HIT training during a time when the “more is always better” approach was the mainstream approach to bodybuilding.

HIT training gained more notoriety after Mike Mentzer wrote about it and did several seminars on why it was scientifically superior to him to train that way, but the question that always stood out in the back of my mind was how much of it was true and how much of it was for marketing purposes.

You see, I know that Mentzer didn’t always train the HIT way.

How do I know this? One of my best friends trained right next to Mike and Ray Mentzer! Mike was doing the same thing everyone else was up until he paired up with Arthur Jones, the creator of Nautilus equipment.

Then came Dorian Yates, the freakish physique that would once again prove that there was obviously truth behind HIT training, as Yates spent less time in the gym than probably anyone else in the professional bodybuilding arena at that time, yet developed a mind-blowing physique that would crush the competition time and time again!

HOWEVER, as effective as HIT training was for 6 time Mr. Olympia Dorian Yates, if you watch any interviews of him now he willingly admits that many of his injuries could have been prevented if he only knew when to back off.

Dorian Yates claims that he never would have gotten to that level of development without HIT training, but admits it also caused serious injuries over the years.

In one of his recent interviews he says that he isn’t even weight training lately due to injuries that he cannot recover from. Instead he does things such as yoga and cardio as his primary physical activities.

This leads me to the point of this entire article. Which style of training is better? HIT training or high volume training? Both are equally effective to me depending on where you’re at, but they’re effective in different ways.

Volume training for myself is more of a break from the high demands of HIT training. I simply cannot keep logging workouts into a logbook and try to beat my previous workouts each and every time for much longer than about 6 weeks.

Don’t let the infrequent workout sessions fool you, there will come a point where you look at what you did last week and say “Holy shit, I have to do how much weight for how many reps this week?”

The further along you get development-wise the shorter these open windows for effective HIT training become. From that point it’s CRITICAL to listen to your body!

Just because you go back to a lighter weight and use volume as your means to train doesn’t mean you’re some weakling!

I have learned that there are plenty of ways to generate intensity in the gym.

Intensity can be generated through lighter weights and shorter rest intervals, heavier weights and less frequency, high intensity techniques, different exercises that place new demands on your body, time under tension, and probably a few other things I cannot think of off the top of my head right now!

Listening to your body is the most important thing you can do when deciding which type of exercise regimen is right for you.

If your tricep tendons are bothering you, it makes ZERO SENSE to tell yourself that you need to do a set of skull-crushers with more weight than last week’s workout because YOU MUST TRAIN HIT STYLE to be your very best.

In reality, it would make much more sense to back off and train lighter or avoid whatever is bothering you for awhile. When your body is healed and recovered then maybe you can get back to whatever it was you were doing before the nagging injury.

You must listen to your body because if you neglect to do this it could potentially cause an injury that you cannot come back from… EVER!

It’s good to question things. It’s better when someone else can reaffirm what you thought might be true.

I have questioned so many things throughout the years and I’ve learned that just because someone is having success with something they’re doing, it may not mean that it’s the right thing for you to do. Maybe it is.

But the irony of all of this is that by improving the function we will improve the look!

So many times we neglect function and health for a certain look, when in reality we could be taking that look far beyond where we’re currently at if only we were aware enough to reverse the order!

So after years and years of battling the baffling question about “which style of training is more effective”, I’d have to say both. For the lifelong gym goer, definitely both!

Over and out -JD

7 thoughts on “High Intensity Training vs. High Volume Training: Which is Better?”