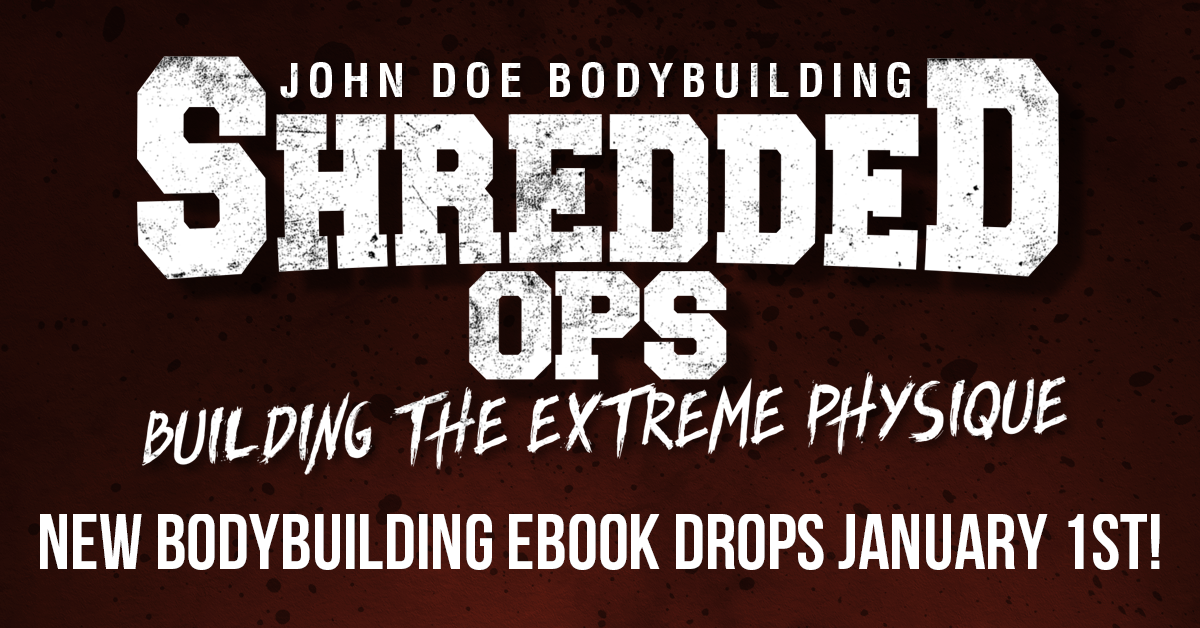 The release of the baddest fucking workout routine I've ever developed!

I was thinking to myself one day about how the body likes to move around and function with it's own resistance.

I was thinking about how some of the most basic movements combined with consistency helped build my body EXTREMELY FAST!

But after being in the gym for over 20 years and trying all different styles of training, there are advanced workouts and rep schemes that can further enhance progress through a heavier resistance than what the body can provide.

But that ever-so-sweet PUMP that you get from your own body's resistance cannot be ignored!

WHAT IF…JUST WHAT IF… WE IGNORED ALL OF THE NORMAL “RULES” OF TRADITIONAL TRAINING AND MADE TRAINING A GOD DAMNED FREE-FOR-ALL!!!

SHREDDED OPS IS A ROUTINE THAT WAS BUILT UPON THE IDEA OF RELEASING THE LION FROM IT'S CAGE TO KILL!

I break all of the rules with Shredded Ops!

And breaking the rules will get the results!

You see, the body works as an entire unit. It doesn't just use your biceps to brush your teeth, or perform a lift with your legs without using your back for support.

Your body doesn't say “Don't perform well today because we did a muscle group yesterday we weren't supposed to train before doing biceps.”

Much of the time THIS BECOMES THE MENTAL FUCK that we put into our own minds that stalls progress!

What if we said to hell with all of the traditional rules and went absolutely insane?

Yet, still found ways to put your feet to the floor during periodic times while allowing our muscles to recover while continuing to blast hard in other areas?

SHREDDED OPS IS YOUR BLUEPRINT TO EXTREME PHYSIQUE DEVELOPMENT!

I've talked about many different diets and training methods in the past, however Shredded Ops is a straight-forward template on getting conditioned in a relatively quick time-frame.

There really isn't anything to figure out after reading Shredded Ops, other than how far you can push yourself physically and mentally!

The best part about this guide is that it's made to be scaled to your own potential. Therefore, just because you aren't benching 400 lbs yet doesn't mean the program won't work for you!

This program was developed under the basis of what I thought an ideal physique should look like.

I want to be big enough that people recognize me as a serious bodybuilder, but lean enough that I can set myself apart from “just big and strong.”

I prefer to have a body of discipline.

I prefer a Golden era look with quality muscle mass and definition, along with proper proportion and symmetry!

I have seen all different styles of training over the years and I think it's safe to say that something can be taken away from each one!

But there are certain parts of different training styles I DON'T LIKE.

Take crossfit for example; the intensity and elevated heart rate from crossfit training is great; the injury prone form crossfitters use isn't so great.

Powerlifters have an incredible amount of strength and insanely strong lifts, but I don't want to look like most of them.

Bodybuilding is great for development and achieving a desirable look, but sometimes it takes you away from routines that elevate your heart rate and provide metabolic conditioning.

Strongman is incredibly impressive but often short-lived from being so injury prone from the training.

I can look at almost any style of training and find likable features with it. But I wanted a more dialed-in routine for my specific goals.

I developed the Shredded Ops routine awhile back, and the results were so good from it that I just couldn't keep it to myself!

I'm not going to come here and lie to you, the Shredded Ops routine is ROUGH! It's not for everyone and certainly not for beginners.

This routine is geared towards people who already have some experience working out.

THIS ROUTINE WILL PUMP THE EVER-LOVING HELL OUT OF YOU!

You have no idea of what a pump really is until you try the shredded ops routine!

This workout routine will have your muscles feeling like they're ready to bust out of your skin!

You can literally go look in a mirror halfway through these workouts and see a much larger looking version of yourself!

There was one day in the gym I snapped a quick photo and it seriously didn't even look like me!

I thought to myself ,”This shit is working, and it's a routine that breaks all of the cliche, bullshit rules of bodybuilding!”

You're going to have to have an open mind with this routine.

Shredded Ops will pull you away from traditional weight training programs and give your entire body a swift kick in the ass to start transforming quickly!

PART OF THE PROGRAM IS BASED ON SELF-CHALLENGE AND BUILDING YOUR MIND!

What I like so much about this routine is how much of a mental battle it is with yourself before you even step foot in the gym!

There are physical tests you will perform before each of the 3 different phases of the program.

Your results on each one of these tests will dictate how many total reps and sets you will perform during your workouts.

And guess what? YOU ARE THE ONE WHO SETS THE BAR EVERY WEEK!

This routine will build a strong mind and a strong body.

SHREDDED OPS IS SCHEDULED FOR RELEASE ON JANUARY 1ST, 2019!

And nah, this ain't no new year's resolution bullshit routine for the weak!

THIS ROUTINE IS PHYSICAL AND MENTAL FUCKING WARFARE!